On February 23, 2013, the Monterey Deanery of the Episcopal Diocese of El Camino Real met at St. John’s Chapel in Monterey. Following the opening prayers and meditation, a short business meeting included a report on the treasury and a report from the Board of Trustees of the Diocese. In terms of the treasury, the Deanery reminded delegates of the request for an annual contribution from each parish ($75) which will add to the existing balance of $840 and will allow the Deanery to pursue mission and ministry opportunities. Meanwhile, members of the Board of Trustees (which operates similar to a vestry for the Diocese) and the Diocesan Standing Committee will be visiting with all of the parishes in the Diocese to “map” and measure our ministry and to foster cross-pollination of ideas.

The main program for the meeting was Mission in the Monterey Deanery:

During the brief panel discussion which followed the program, the participants discussed avenues for support of mission within the Monterey Deanery. A motion was put forward to donate $500 from the Deanery treasury to support the work of Robin Denney in Gonzales. The motion carried.

The next meeting of the Monterey Deanery is Saturday, May 4 when the program will be Implementing Mission. 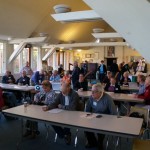 Delegates to the Monterey Deanery gather in the parish hall of St. John’s Chapel, Monterey, on February 23, 2013. 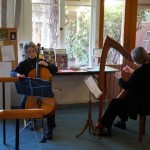 Music for the opening meditation is provided by Bonnie Ott, cello, and Karen Turner, harp. 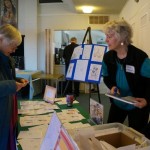 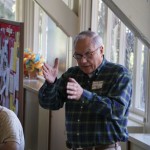 Win Fernald gives the Board of Trustees report.

Steve Dodds tells the story of St. Philip’s journey from mission to parish. 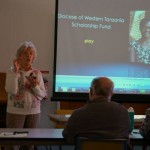 Julie Fudge presents the scholarship program for the Diocese of Western Tanganyika.