The Monterey Deanery met on September 7, 2013, at 10:00 am at Epiphany Lutheran and Episcopal Church, Marina. The agenda for the meeting is available here.

The meeting opened with Morning Prayer led by the Rev. Blaine Hammond.

Board of Trustees – Win Fernald briefly reported on the Bishop’s Appeal which is going well. The Department of Higher Education committee has been formed with representatives from each campus ministry. The Board also discussed the congregations which are in the process of merging. There are also some serious issues facing congregations in south Monterey County. Mission House will be moving to Salinas.

Treasurer – The Deanery treasurer has resigned because of time conflicts. The Deanery elected Dottie Fuller as treasurer.

Commission on Children and Youth - The Monterey Deanery elected Bettina McBee Hohmann (St. John’s, Monterey) and Louis Powell (All Saints’, Carmel) to serve this commission. In addition, we provisionally elected Michelle Gagon-Smith (Good Shepherd) to serve on the commission as a young adult member.

The budget process has not changed much over the years. Budget requests this year exceeded projected income by $90,000. The diocese is in the best financial shape since the market meltdown in 2008. The proposed budget and narrative budget are available for review.

Resolutions are due September 9 and the official proposals will be released shortly after that date. In the meantime, the following summarizes proposed changes to El Camino Real’s Canons:

Additionally, an annual minimum compensation for clergy resolution and a resolution on State of Stewardship Commitment have been received.

Brian reported on the kick-off of this year’s scholarship program in the Diocese of Western Tanganyika. We funded over 560 students last year with $30,000. The benefits of the program reach beyond just the children to include the families and the life of the communities in which they live.

Father Fred from the Diocese of Western Tanganyika will be arriving in El Camino Real in the second week of September through diocesan convention where he will be the preacher. Congregations and deaneries are encouraged to schedule events or Bible study with Father Fred in their local areas. Father Fred is Dean of the Bible College Tanzania and has served in the administrative role in DWT.

The Bishop gave a presentation on how community organizing principles can be used to bring groups together to meet common goals. She used the metaphor of creating enough productive friction so that separate groups could start a fire together. 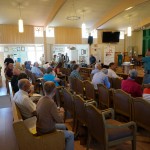 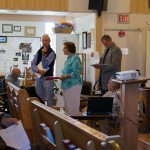 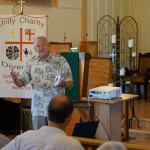 Brian Nordwick updates deanery delegates on our partnership with the Diocese of Western Tanganyika.