The meeting was called to order by Deanery co-convener Richard Smith of St. George’s, Salinas. Morning Prayer was led by the Rev. Lawrence Robles from St. George’s.

Treasurer – No changes were reported since the last meeting. However, we were reminded again that there is a $75 assessment due from each parish. It was suggested that the deanery establish budget priorities which will help parishes understand what their assessment is going toward.

Board of Trustees – Win Fernald, St. John’s, Aptos, reported on the activities of the diocesan Board of Trustees. He indicated that the Board is addressing two questions: How are we building the Body of Christ? and How can we grow in a time of loss? He reported that several parishes in the diocese are merging (notably All Saints’ and Cristo Rey in Watsonville and possibly in the near future St. Paul’s and San Pablo in Salinas). He says that the diocese is beginning to participate in The Barnabas Project, a program aimed at leadership development (http://www.episcopalfoundation.org/tools-and-programs/endowment-tools/the-barnabas-project). Another diocesan activity has been the expansion in communications with the recent mailing of a full-color brochure on the diocesan strategic plan. The diocese is looking at various kinds of communications vehicles such as this. Such a flyer costs $1/person per mailing. The diocese continues to plan for moving the office to Salinas; and the recent audit was “clean.”

Ministries to Veterans – Charles Greenleaf, St. John’s, Aptos, reported on a new ministry taking shape at St. John’s focused on veterans. Two Vietnam vets at St. John’s succeeded in getting a grant that has allowed them to open an office providing support for Vietnam and Iraq war vets. They urged other parishes with similar interests to contact them.

Deanery Website – Jeff Diehl gave a presentation on the new Monterey Deanery website (http://montereydeanery.org/) which was enthusiastically received by the delegates and resoundingly approved. We are all urged to submit events and other news via the easy-to-use tool on the website. Jeff Diehl will continue as moderator for the time being. We are welcome to publicize the web address and acquaint our parishes with its availability. Next steps include notifying the diocese, linking from the diocesan website, and announcing on Facebook.

Mission at St. James, Monterey – The Rev. Jeff Kohn gave an overview of St. James’, Monterey, the first Protestant church on the Monterey Peninsula, founded in 1876. He describes St. James’ as a spiritually-centered place. They recognize that they are a small parish, but they have a large building (McGowan House) which has become a spiritual center for Monterey, hosting 27 twelve-step programs, a Korean church, a Zen Buddhist meditation service, and various arts programs. He says they have seen the evangelical benefits of their hosting such services and programs and have learned to celebrate what they have.

missio:Engage! at St. John’s, Aptos – Jon Showalter and the Rev. Rob Neville reported on the missio:Engage! program at St. John’s, a two-year redevelopment process sponsored by the Episcopal Church and supported by a community of practice of other churches (see http://5marks.org/). The program costs $5,000 and includes regular online meetings with other churches participating in the program. It allows congregations to identify the best way to engage with the larger community and to bring in new members. St. John’s has completed an inventory of their gifts and they are now in the process of developing their skills in welcoming and inviting new members. On June 30, they will conduct a 2-hour workshop on welcoming and inviting and it is open to all churches in the deanery.

More Effective Networking – Steve Dodds, St. Philip’s, Scotts Valley, gave a presentation on how we as a deanery can network more effectively, but he acknowledges that the points he makes can be used in any organization. He is the Executive Director of Every Voice Engaged (http://everyvoiceengaged.org/), a nonprofit focused on helping citizens, government agencies, and nonprofit organizations collaborate successfully on improving quality of life. Their process includes various “innovation games” which encourage people to talk together and prioritize solutions. He suggested that the deanery use the process to a) develop a strategy for prioritizing deanery budget and programs and b) get to know each other better. This type of networking process would also work well in developing a capital campaign for a church.

Building Networks Beginning with Prayer – The Rev. Bob Ott, St. John’s Chapel, Del Monte, and the Rev. Blaine Hammond, St. Andrew’s, Ben Lomond, gave a presentation on prayer networks. At the January 2013 retreat of the Board of Trustees and the Standing Committee, Bishop Mary told attendees that she and the diocesan office staff pray daily for all the parishes in the diocese. Following up on this practice, each member of these two committees was given three congregations to pray for. Each was asked to contact the parish and ask them what prayers they needed. Both Bob and Blaine thought this would be something to think about doing within the deanery, partnering two churches to pray for each other. St. Andrew’s, Ben Lomond and St. George’s, Salinas are already doing this for each other with rewarding results. So at this meeting, we put all the names of the churches in the deanery into a bowl and paired them up. Here are the Deanery Prayer Partners for 2013/2014 (additionally, all churches are asked to pray for Trinity, Gonzales):

Among the announcements of various activities at the churches in the deanery, Maurice Dyer from St. James, Monterey, introduced himself as a new member of the Episcopal Young Adult Service Corps. He will be leaving for South Africa this summer to begin work at the Holy Cross Monastery and School in Grahamstown, South Africa. Prayers are encouraged, along with donations to the diocese to support his work. Follow what’s happening with him on his blog http://mauricedyer.blogspot.com/. 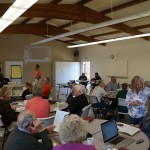 Deanery delegates gather before the start of the meeting.

Steve Dodds demonstrates one of the tools that could be used by the deanery for effective networking. 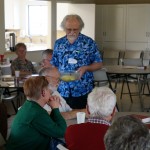 The Rev. Blaine Hammond invites deanery delegates to choose congregational prayer partners out of a bowl. 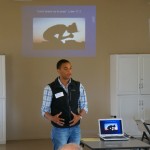