The meeting opened with prayer led by the Rev. Bob Ott.

Board of Trustees – Win Fernald reported on the last meeting of the Board of Trustees on June 20.  The main agenda item was the Bishop’s Appeal and the draft budget for 2014 (to be introduced to the Deanery at the September meeting).

Standing Committee – No report as the Rev. Richard Leslie is on vacation.

Website – Jeff Diehl reported on the Deanery website which has been well received. He reminded members how to submit event and information notices to the website (montereydeanery.org). Jeff is also on the Diocesan Communications Commission which is looking at ways to improve overall communications within the diocese.

Stewardship Commission – George Lockwood reported on the activities of the commission. He noted that over the last 15 years, there has been a steady decline in giving at the parish level. One commission proposal is to employ a stewardship officer in the diocese and this has become part of the Bishop’s Appeal. He announced that commission members are willing to meet with individual parishes to help them strategize their stewardship campaigns. He also recommended that parishes consider bringing in Bill Brooks, an attorney in the diocese, to review the physical safety of parish buildings with an eye toward correcting potential hazards.

Bob provided an overview of the various positions which will be filled this year, either by election at Diocesan Convention or by appointment by the Bishop:

Commission on Ministry – assists the Bishop in overseeing the development and affirmation of ministry and the ordination process. One clergy and one lay member are elected at large each year by Diocesan Convention for a 4-year term. The Bishop may appoint up to 8; this year she will appoint one.

Department of Mission – Each deanery must elect two members to serve in this department.  The Monterey Deanery currently has two members serving. The Bishop appoints four members each year for a one-year term.

Bob encouraged deanery delegates to publicize these openings within parishes and to encourage self-nomination.  The Diocesan Nominating Committee will be soliciting nominations in the near future.

Blaine reminded us of our deanery prayer partners which were organized at the last meeting. Jeff is incorporating this information into the deanery website.

For 30 years, the San Pablo mission has been worshiping at St. Paul’s and was seen primarily as a renter.  The dream was that they would become self-sufficient and move into their own space someday. That hasn’t panned out, and now the two churches see that the future belongs to them together as one in a bi-cultural and bi-lingual community.  This is moving forward but not without a lot of anxiety. So far they have been able to integrate many administrative functions and to unify their budgets financially. It is harder to build personal relationships. They have established a parish-union commission to review mutual ministries and stewardship. It is a work-in-progress. San Pablo’s level of giving is improving and there is a growing number of children in the parish. Where St. Paul’s had become an aging congregation, San Pablo is a growing family congregation. This year they will have a joint confirmation class. They are also working with Eric Law from the Kaleidescope Institute (http://www.kscopeinstitute.org) to help them move through this transition.

Following up on the presentation by St. Paul’s/San Pablo, Jesús provided additional information on various congregation development activities in the diocese.

On August 23, Eric Law from the Kaleidescope Institute will conduct a program for merging parishes (such as St. Paul’s/San Pablo) and there are several. One of the Diocesan Strategic Objectives is to expand diversification in parishes. Jesús says there will be 15 consultants available in the diocese to help parishes discern how to improve age, ethnic, and income diversification.

The diocese is establishing a Partnership Committee, another outgrowth of the Diocesan Strategic Plan. This committee will look at missional opportunities and how to be more intentional. This effort is based on three principles:

One of the congregational development programs of the committee is focused on helping parishes “map” themselves:

Jesús is offering a workshop/retreat for parishes called The Sacred Art of Prayer, based on Benedictine spiritual practice and designed to help participants develop their own rule of life.

Episcopal Church Women (ECW) – Joyce Nehlsen gave a brief presentation on the ECW in the deanery. One purpose of her presentation is to solicit two ECW board members from each deanery.

Now that the deanery is more intentional about collecting the annual dues from each parish, Bob proposes that the deanery establish a stewardship committee to determine a purpose and procedure for use of the funds in the deanery. He is soliciting members for this committee.

The meeting continued with announcements of activities from various parishes.

The meeting concluded with a benediction by the Rev. Blaine Hammond. 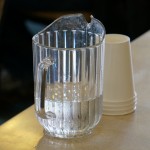 In keeping with policy adopted by diocesan convention, water is provided in reusable pitchers. 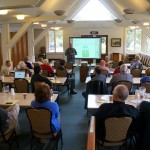 The process for merging St. Paul’s and San Pablo is described by the Rev. Jim Ezell. 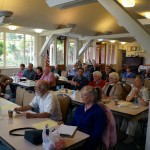 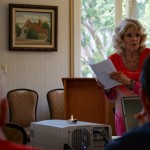